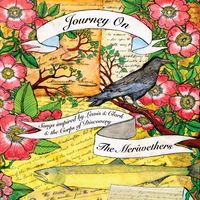 From the recording Journey On

July 4, 1805
LEWIS: Our work being at an end this evening, we gave the men a drink of spirits, it being the last of our stock, and some of them appeared a little sensible of its effects. The fiddle was played and they danced very merrily until nine in the evening, when a heavy shower of rain put an end to that part of the amusement, though they continued their mirth with songs and festive jokes... We had a very comfortable dinner of bacon, beans suet dumplings and buffalo beef... In short, we had no just cause to covet the sumptuous feasts of our countrymen on this day.